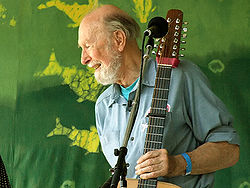 Almanac Singers 1941 "Talking Union" and "Dear Mr President"
The Weavers from Traveling On "Old Riley"
Peter Paul and Mary 1962 "If I Had a Hammer", "Where Have All the Flowers Gone"
Memphis Slim and Willie Dixon with Pete Seeger "Live at the Village Gate" in 1962, "In the Evening When the Sun Go Down" It's a real surprise to hear Pete sing the blues and play is on his banjo like nothing I've ever heard before.
The Library of Congress added the recordings from 1963 Live at Carnegie Hall "We Shall Overcome" and "Guantanemera" to the National registry as culturally significant pieces.
He sings Phil Ochs' "The Power and the Glory" from the 1966 album God Bless the Grass. "God's Counting on Me God's Counting on You" was a song he wrote at 91 yrs old about the Deep Water Oil Spill.
He was an inspiring person as a musician, as an activist and as a man.